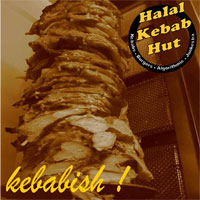 Halal Kebab Hut are a band of improviseurs de junk. The group is the gastrosonic brainchild of Simon Katan, who creates all the algorithmic fodder for the band. This takes the form of game pieces - rigorous, non-linear, rule-based structures that provide differing systems of organisation without prescribing content - that bind the performers actions together into complex networks of interrelations.

Uploaded by sloblizard on December 4, 2007